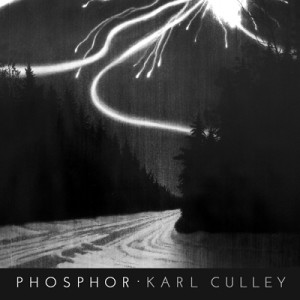 Karl Culley’s third album issues forth a set of songs and performances that present an artist who is at the top of his game. An assured and powerful sequence of music that bristles with the raw, glistening elements that make up this man’s unmistakeable and ever more clearly defined voice. Virtuosic and effervescent guitar playing, evocative lyrical imagery and a taut and emotionally complex vocal delivery all combine to stunning effect.

‘Phosphor’ signals Karl’s resumption of his collaboration with producer Giles Perring [Echo City, Fad Gadget, Unmen, Yat Kha], and as well as a session in snow bound Krakow, it also marks a return to the Scottish Isle of Jura to draw on her dark, primordial and occasional exotic liquid influences. Karl and upright bass player Ash Johnson’s stripped down acoustic performances burst out of the speakers in a recording that, while it’s honed from minimal sonic elements that hark back to John Martyn’s ‘Solid Air’, bristles and pops with the chemical fizz of dance music, the bubbling bass hooks of dub, and sways and bends in the gentle current of flowing lyrical guitar figures. With a number of telling contributions from Giles Perring on a variety of instruments, and the return of the backing vocals of the Jura Male Voice Choir so gorgeously showcased on Karl’s first release ‘Bundle of Nerves’, ‘Phosphor’ also conjures up radiant guest performances from Phillip Harper on drums and percussion, Simon Edwards, on a bowed psaltery, and the exceptional voice of Melanie Pappenheim.

With the release of his third album, ‘Phosphor’, Karl Culley puts forward an ever more persuasive argument that he is one of the most significant artists in British acoustic music.

We have a free download for you here, and you can buy the album directly from Sound of Jura here. Alternatively you can get the digital download from iTunes or Amazon UK.

Meanwhile, you can see an exclusive version of ‘Dragon Kite’ filmed live during the album sessions in Karl’s house in Krakow on Youtube